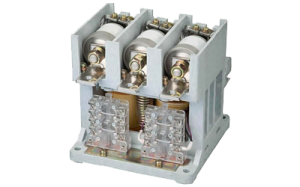 Vacuum contactors like KVTN and VKNSh of production of NPP-Elektrodinamika - have natural air cooling and are intended for switching of asynchronous engines with a short-circuited rotor and other receivers of the electric power in electric networks with a rated voltage up to 1140 V. of Kontaktora provide working capacity in categories of application AS-3, - AS-4 and other modes according to GOST 11206.

Distinctive feature from contactors of common industrial appointment is the advanced payment of management of the contactor (is in addition established the RC filter) improved - system of the block of auxiliary contacts, material of the case differs in the increased tracking resistance.

Vacuum contactors like VKNSh are issued in two tipoispolneniye on degree of protection. Are the upgraded version of contactors of KVTN of mine execution and differ from them in the case of the contactor improved on tracking resistance and material of the main contacts in vacuum chambers (the special alloy having the raised tokoprovodimost and thermal stability is used).

Are intended for work in the following modes:

Are used:
- -> as a part of SUV-
- -> as a part of PVI-
- -> in systems of remote control of electric drives on the mine equipment -
- -> in devices of the automatic inclusion of a reserve (AIR) -
- -> in stations and control units of asynchronous engines with a short-circuited rotor -
- -> in other devices.

- -> lack of an open electric arch -  - -> lack of need for service of the main contacts -  - -> low level of noise at inclusion and shutdown kontaktora-  - -> the reduced dimensions in comparison with air kontaktorami-  - -> the raised resource on limit currents of switching.  -  -

Vacuum contactors like KVTN and VKNSh of mine execution of production of NPP-Elektrodinamika - are made according to TU U 31.2-31633409-001:2011, are certified in the State System of Sertifikatsii UKRSEPRO, tests are taken place and protocols for use in the mining equipment are received, the certificate of conformity at the State Makiivka research institute on safety of works in mining industry (MAKNII) is issued.