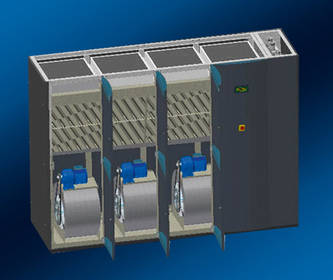 In stock
Reconfirm the price with seller
GEA-Ukraina, OOO (GEA Ukraine)
Ukraine, Kiev
(View map)
Call
Products of other enterprises
Description
Installations of a series E, as well as a series T, offer at choice of 5 models with a refrigerating capacity from 20 to 120 kW. Series E and T are externally very similar, but models from a series E considerably already - their thickness only 800 mm – and, as a result, take much less place. Installations of a series E are equipped with independent fans with V-shaped belts. For decrease in noise level use large low-speed fans with double absorption, the doubled width with bent forward by shovels of the driving wheel and equipped with the pressurized ball or roller bearings. Installations are equipped with one, two, three or four fans depending on the amount of installation, each fan is equipped with the electric motor. The HS model of a series E includes in addition highly effective sections of filters that does possible its application in such areas as pure rooms, laboratories and rooms for testing.
Contact the seller
Conditioners precision GEA Denco series "E