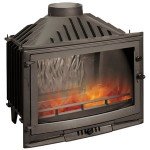 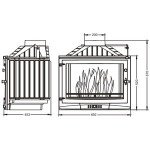 Uniflam 700 Selenic is a standard pig-iron insert of the seven-hundredth series with flat glass and a semicircular frame. Will perfectly fit both in flat, and into semicircular design of finishing. It is available also with the built-in shiber.

Chimney fire chambers of Uniflam are made in France since 1926. Own molding of cast iron allows to create the optimum prices in the market.