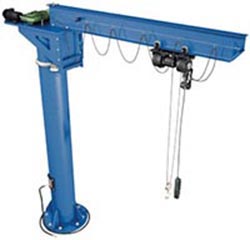 The crane console - rotary - represents the console which leans on the top part of a column fixed on the base (console cranes on a column), or the console from a box-shaped profile or a dvutavrovy beam of which are attached by means of a raskos to a vertical rack (wall console cranes).