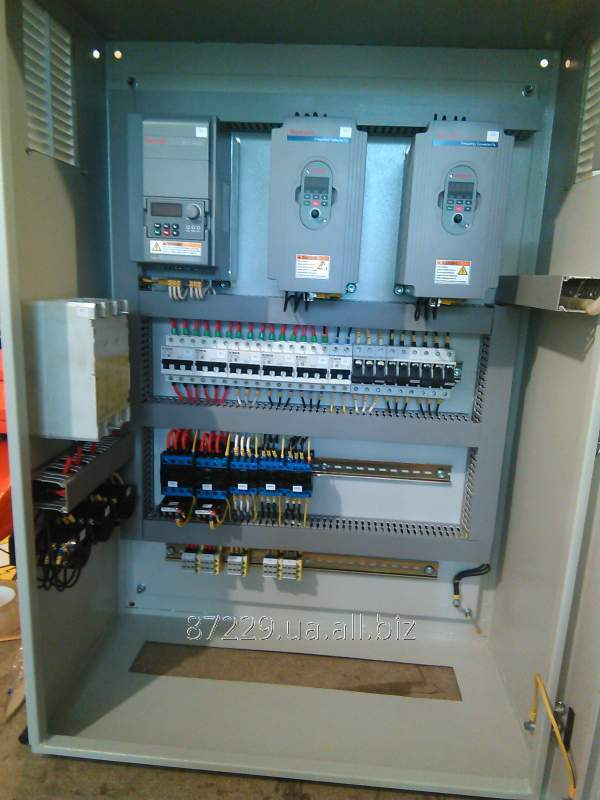 Cabinet of control of the asynchronous electric motor

CASE OF CONTROL OF THE ELECTRIC MOTOR
LLC T Korp group makes cases of control of the asynchronous electric motor (ShUE) on the basis of converters of frequency or devices of smooth start-up.

We offer flexible approach to each client: equipment of cases of control of converters of frequency of various producers is possible that significantly influences the final price of the electric drive. Replacement of an old control system by such case of management allows to increase significantly the accuracy and range of regulation of parameters of the electric drive, and also to considerably cut an electric power consumption. At the same time not only electric drives of the mechanisms set in motion by the engine with a short-circuited rotor (pumps, fans) but also mechanisms with electric motors with a phase rotor (crane mechanisms) can be exposed to re-equipment.

The principle of action of ShUE consists on continuous control of change of parameters of system and the choice of optimum operating modes of electrical machines. The case of management can work both in manual, and in the automatic mode. In systems with the changing productivity the case of automatic control can significantly reduce the consumed energy, provide protection of the engine against emergency operation of work, to thereby increase operation term.

Making a case of control of the electric drive, we use accessories as world leaders, such as ABB, Schneider Electric, WEG, Siemens, and leading Russian producers, such as JSC KEAZ, "ChEAZ", JSC Kontaktor, etc.

Cases of management can be completed also with governing bodies (joysticks, controllers, portable panels, etc.). The offered systems of an upraleniye can be integrated by the electric motor with converters of frequency into the existing system of automation.

The equipment entering a case of control of the electric motor can meet the requirement of any customer for the width of the application. Wide functionality of converters of frequency allows to avoid in many cases use of additional devices, such as controllers since the majority of functions on management and protection carries out the converter.

Use of ShUE allows to provide

Formation of starting characteristics of electric motors (smooth launch, accident-free launch of electric motors in the conditions of the enterprises with deficiency of power, a reversal, braking, a stop);
Distribution of loadings - management of operating modes of the electric motor in compliance technological need of operation of electromechanical complexes;
Optimization of the starting and brake moments for unaccented dispersals and stops of driving mechanisms, increase in service life of bearings, reducers, belts and other details of cars;
Rational distribution of production capacities in systems of power supply (use of electric motors as consumers regulators of daily production schedules);
Protection of the electric and mechanical equipment against emergency operation;
Economic operation of processing equipment.

Contact the seller
Cabinet of control of the asynchronous electric motor