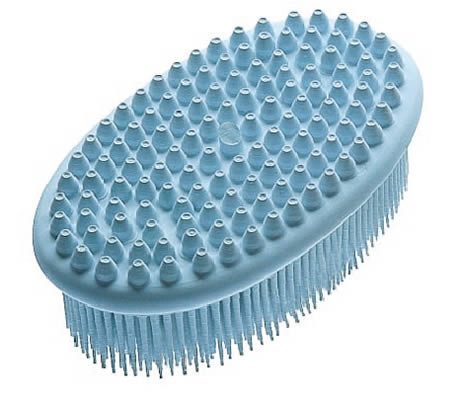 The stimulating massage brush from natural rubber has double action. Effectively and softly clears skin of any pollution. Masses a body and eliminates displays of cellulitis.
When we wash, we try "to brush thoroughly", "otshkurit" very much the body a natural bast. On another did not get used. And here our brush not such. It is tender, differently and you will not call! She washes, strangely enough, it is not worse rigid, natural.
This nice and nice on the touch brush vigorously, but at the same time will gently wash up your body. Quite often it happens that soap dries sensitive skin, and shower gels leave a film which does not do well to an organism too on a body.
Application:
The brush of souls massage is applied both with detergents, and without them!
If the body which is steamed out it is possible "to poshkurit" itself the massage party. At the same time the brush will make an excellent peeling, will remove the horny parts of skin, opening new, young. Do not forget to walk a brush on heels, knees, lokotka, it will make them smooth and gentle, as at the child!
If you use soap or shower gel, then apply it on the soft nap party and rub - stroke yourself. After this procedure the body will creak from purity!
The reverse side of a brush is covered with special pimples which excellently otmassirut your problem zones. It easily slides on the soaped surface, deeply massing skin and eliminating displays of cellulitis.
It is not dangerous to give such brush also to children especially as it is pleasant to them. For children a brush of souls massage a favourite toy: both it is pleasant to play with it and to wash not painfully! Such nice on the touch brush it is easy for children to impart hygienic skills.
Leaving:
Usual brushes and basts often are messengers and stores of harmful microbes. It does not belong to a brush of souls massage: it can be sterilized in the most reliable and ecologically safe way — boiling. The rubber brush maintains heating of + 140 degrees. It is steadiest against attrition. Pile of a brush does not hesitate.
Size: 12, 5kh7kh4sm.
Producer: LEKUE, Spain.