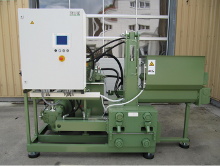 The hydraulic briquette press of RUF-LIGNUM makes briquettes of 150 x 60 mm in size in the section (the German DIN 51731 standard). Length of a briquette of 40 - 110 mm depending on installations and a type/size of the bricketed material (the approximate weight of a briquette 835 gr with a length the 85-95th)

Press RUF-Lignum has productivity to 500 briquettes an hour (400 kg/h).

RUF-LIGNUM represents a little modifitsiroanny model of a press preceding RUF-400 and without the last innovations. The company sells it slightly cheaper than RUF-400 though LIGNUM has the same productivity and lets out the same briquettes.

The pressing part of a briquette press and its hydraulic drive are mounted on the bearing frame having elastic damping support. The case of electroautomatic equipment is located on a frame and integrated into a press. The electrical wiring of a press is mounted completely, a cable are laid in protective trays. The press is ready for operation right after connection to the power supply network and system of supply of material.

The press and system of electroautomatic equipment in standard execution are designed and made for operation at ambient temperature from +5 °C to +40 °C.

The press is equipped with the loading bunker volume pribl. 150 liters. The bunker is supplied with a mixer for prevention of lag of material in the bunker and the loading screw with the driving electric motor.

To buy a briquette press, press briketirovshchik ruf, to ruf.

We recommend to see
Presses baling-press
Send inquiry
Buy
Contact supplier
Your question has been sent successfully
Consultants of the shop typically answer questions during the day.