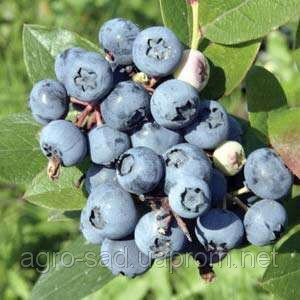 Blu Jay (Blue Jay) – a grade of blueberry of tall, American selection. The bush silnorosly reaches two meters, demands undercutting. Blossoms white flowers in May. Leaves are glossy, darkly green, become red in the fall. Berries average, large light blue color with a little tart, sweet taste aroma. Berries are picked in large brushes. Blyukrop ripens in July approximately along with a blueberry grade, and fructifies for several weeks. Advantage of a grade is resistance to frosts and diseases (especially to fruit decayed). As well as everything the grade of blueberry demands the sour soil with sufficient systematic watering. It is possible to put both in a shadow and on the open sun, but for the southern regions it is recommended to put in a shadow (under trees). Berries tasty fragrant, it is possible to consume as fresh and to preserve and cook jams and pies. For more plentiful fructification it is recommended to plant one more bush of blueberry for cross-pollination nearby. The grade monoecious contains both pistillate and man's flowers.

If you decided to plant saplings of blueberry garden on the site, then do not forget to support a landing hole in a damp state, without having allowed drying. If at you there is not a lot of blueberry bushes, then very conveniently and effectively to use a watering can — you will not wash away a mulch as it can come when watering from a hose under a high pressure. Humidity of the soil has to be 60-70% of a full field moisture capacity.

At the dacha 2 times a week on one bucket of water on one adult bush twice a day are better to water bushes of blueberry (better in the evening). Plentiful watering is necessary in July — August as at this time blueberry fructifies, and the floral kidneys forming a harvest of next year are at the same time stuffed up. If it will be not enough moisture, then you considerably will lose a harvest not only in it, but also next year.

If on the street high temperature of air within several days settled, then except watering it is necessary to spray bushes for the purpose of cooling after a lunch at 16 o'clock. Thanks to spraying the stress from an overheat decreases and photosynthesis speed increases.

Mulchirovaniye — an Earth's surface covering around a plant different materials for preservation of humidity in the top layer of earth. It is possible to mulch blueberry bushes straw, leaves, needles, and best of all pereprevshimikhvoyny sawdust, or bark. The layer of a mulch can be from 4 to 15 centimeters.

By means of a mulchirovaniye you will get rid of weeds and will create optimum conditions for maintenance of optimum humidity of a substratum in which blueberry bushes grow. Thanks to a mulch layer at plants a little later in the spring kidneys are dismissed that helps blueberry to cope with fluctuations of winter and spring temperatures.

Mineral food and use of fertilizers

Blueberry garden needs mineral fertilizers. The quantity and composition of the introduced fertilizers need to be defined proceeding from features of the soil on each concrete country site.

Definition of a shortcoming or surplus of batteries at survey of bushes of blueberry.

At enough nitrogen at plants rather big dark green leaves and a strong gain. At deficiency of this element growth of escapes is slowed down in the beginning, then old leaves get a yellowish-green shade. At considerable deficiency of nitrogen the plant becomes flavovirent, then leaves on it get a reddish shade, growth is slowed down, and the harvest and the sizes of berries sharply decrease. The young escapes growing at deficiency of nitrogen have distinct pink color, and after the termination of growth become pale green.

Excess of nitrogen causes the active growth of escapes which continues to the late fall. As a result escapes do not manage to ripen and odrevesnet that you bring them to frosting or death into the winter period.

Often producers, trying to accelerate growth of saplings of blueberry, overfeed them with nitrogen. As the result, bushes look very high, and they can be sold to you as 3 or 4-ekh summer, and actually the bush is only 2 years old. But not it is dangerous — dangerously the fact that such bushes during the winter can die or the part of escapes considerably will freeze slightly. To define the overfed bushes very simply in October-November when all qualitative bushes take a beautiful decorative form: the foliage is red. At the overfed blueberry bushes color of leaves and escapes green green ilitemno. Met it?

At deficiency of phosphorus of a top of leaves there are purple-green, and their bases — dark-purple. Over time all leaves get a purple shade and leathery texture. Extent of manifestation of a symptom depends on illumination of bushes: under bright sunshine purple coloring is clearly visible, and at shading or overcast it can disappear. Leaves at a lack of phosphorus closely nestle on a stalk (while usually they are located at right angle).

At deficiency of potassium at first die off tops of leaves, then necrotic spots in the middle and at the edges of a leaf appear. In process of increase of deficiency of this element of edge of leaves are jarred on. On young leaves yellowing between veins is observed from time to time. The grown escapes die off, at the same time the black top stands out clearly. Strong growth of escapes of branching from lateral kidneys which also die off after a while is observed from time to time.

Calcium. There are no bright symptoms of a lack of this element. The jarring-on leaves with the turned yellow edges are the most noticeable. On top leaves there is an easy flavovirent spottiness, edges turn yellow. From time to time leaves form sockets . The top of a leaf is jarred on and can fall off.

Deficiency of magnesium is easily distinguished on bright red edges of old leaves. Red coloring at the edges and between veins strongly contrasts with green color which prevails in the center of the sheet near an average vein (reminds a Christmas tree). At intensive solar lighting necrotic spots are found, and instead of red coloring yellow or brown shades appear.

Deficiency of pine forest is distinguished on blue coloring of the top leaves which are sharply stopping growth. Then on old leaves easy yellowing between veins, and on young people — yellowish points is found. Leaves are bent. Escapes stop growth and dry up. From time to time the death of escapes leads to education "vedminy metl" (development of escapes from underlying kidneys which then also die off begins).

Points yellowing near veins at young top leaves to a lack of iron. Further symptoms are shown in the form of a grid of green veins against lemon coloring of all leaf on tops of escapes. Shortage of iron has extremely an adverse effect on growth and fructification of plants.

Deficiency of manganese, as well as deficiency of iron, is shown on young leaves in the form of yellowing between veins. The difference is that green coloring near a vein has wider border. Over time the turned yellow sites at the edges of a leaf die off. There are necrotic points according to all leaf which gradually merge and the leaf perishes.

Deficiency of zinc of blueberry is shown in the form of yellowing of young leaves, at the same time all leaf becomes citreous. Leaves do not grow, become small and narrow, form sockets as interstices are reduced too.

Sulfur. Hlorotichesky spots on leaves are a sign of starvation, and at an acute shortage on them yellow-white coloring appears. In hard cases leaves become whitish-pink or even white. The lack of sulfur of the soil leads to increase rn (an indicator of acidity of the soil) and to deterioration in activity of a mikoriza. On soils with rn 5 units are recommended to bring 50 grams, and on soils with rn 6,0 — 100 grams of sulfur on 1 sq.m. Use of sulphatic forms of fertilizers is an additional source of sulfur. The same impact is exerted also by acidulation of the soil sulfuric acid (or electrolyte).

Signs of deficiency of copper are shown, first of all, on leaves. They become shallow, are often twisted by the boat up. Older leaves grow brown and die off, tops of branches dry up. Sometimes, as well as at a lack of pine forest, from the lateral and sleeping kidneys grow numerous small branches — "broom vedmina".

Deficiency of molybdenum is shown on young leaves of the growing escapes in the form of a hloroz between veins.

When it is the best of all to bring mineral fertilizers for blueberry garden?

On soils with acidity (PH) higher than 4,8 twice during the season with an interval of 6-7 weeks it is necessary to bring ammonium sulfate at the rate of 10 — 15 grams on 1 sq.m. On soils with an optimum level rn it is recommended to bring 90 grams of sulfate of ammonium, 40 grams of sulfate of potassium and 110 grams of superphosphate on one adult bush of blueberry or 200 — 250 grams of the Kemira Is the Versatile Person fertilizer (now Now it is made by Fertiko's company) or Polish the Florovit fertilizers.

Scheme of introduction of mineral fertilizers.

You do not bring in the soil and do not feed up garden blueberry organic fertilizers (manure, a chicken dung, even compost).

How to protect blueberry saplings from frosts?

In severe snowless winters there is a probability of frosting of bushes.

On personal plots bushes of blueberry it is possible to tie with fir twigs or to cover spanbondy , it is better a sacking (do not use a polyethylene film at all) previously having made near bushes a framework of stakes or two wire arches located a cross crosswise.

During vegetation (growth of plants) under bushes of blueberry it is not necessary to introduce a high dose nitrogen fertilizers, especially after the end of blossoming not to cause growth of escapes late fall. At excess of nitrogen the part of escapes during the winter period will freeze slightly (also all bush can die).

During blossoming blueberry garden transfers frosts to -7 °C. Therefore during the spring period protection is necessary seldom. In the fall, during maturing of berries, frosts can do harm to late-ripening grades of blueberry. Green berries are damaged at a temperature of -2 °C. Therefore during the autumn period it is necessary to apply overhead irrigation or shelter to protection of bushes of blueberry any improvised material: spanbondy or sacking.

When and how it is necessary to begin cutting of bushes of blueberry garden?

Cutting of bushes of blueberry can be carried out on 2-4-year plants, for laying of a strong skeleton of a bush. It is necessary to remove all fruit kidneys which are available on a plant.

Further cutting is required after the 3rd year after landing (that is the plant will be 5-6 years old). Delete only small bushy prirosta at the bush basis, the sick and lying on the earth branches.

The plan of annual cutting, since 4th year of cultivation of blueberry:

1) it is necessary to cut off low sprawling branches about the earth, keeping only upright prirosta;

2) if the middle of a bush of a zagushchen, then in it it is necessary to cut out weak and very old branches;

3) the majority of small thin branches delete, leaving strong skeletal branches and escapes. From one-year escapes it is desirable to leave 5 strongest.

Blueberry fructifies on prirosta of previous year. Extent of cutting depends also on intensity of growth of escapes. If the grade is inclined to strong forthputting as, Renkokas , then a scrap needs to do strong.