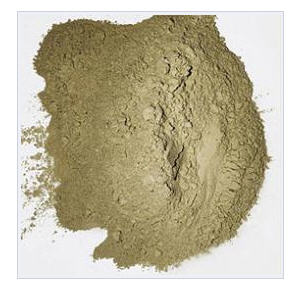 Bentonite is the mineral educations belonging to the class of aluminosilicates, having high dispersion, i.e. possessing crystals in size at the level of less than 1 mkn. and, thereof, having a big specific surface. Features of a kristallokhimichesky structure of bentonites cause availability on their surface of the ion-exchange cations which enough are strongly influencing physical and chemical properties of minerals.

Practically two names appear in all technical editions of the beginning of the 20th century by consideration of bentonites: fullerova of the earth and bentonites. To fullerovy lands since ancient times (since the Roman Empire) carried the clays possessing ability to absorb dispersion particles of the different sizes. Such clays used for purification of the wool used for cloth production of fat. Fuller or fuller in the English transcription is translated as suknovat. Afterwards it has been established that in the nature two types of fulling clays meet. Clays of one type were used as fulling in a natural look, another after chemical treatment or activation. Large accumulations of clays of the second type have been found near a fort Benton (USA) and have received the name bentonite. Later mineralogical researches have shown, as "earth fullerova" and bentonites have almost identical mineral composition.

Bentonite - the breed consisting generally of smektitovy minerals. The group of smectites includes several minerals: montmorillonite, beidellite, nontronit, etc. less widespread. The crystal lattice of all smectites consists of layers. 3 layers which form a package enter lattice cell: Extreme upper and lower layers of a package consist of tetrahedrons of Al, SiO4 and are called tetrahedral. Between tetrahedral layers the layer consisting of octahedrons of Al and Fe, called octahedral is located.

Thanks to a negative charge, on a surface of a package are located positive one - two - and trivalent cations. It is, mainly, Na, K, Ca, Mg and Fe. As a result of interaction with water around these cations hydrated covers and the unit of packages at the same time can be formed bulks up. It is characteristic that the volume of a hydrated cover for different cations is different. Ions of alkaline metals and first of all sodium possess the greatest hydrating ability. Significantly ions of alkaline-earth metals possess the smaller hydrating ability: calcium and magnesium.

The specified feature of smectites to bulk up, increasing in volume at 2-20 times extremely important property for their industrial use. Among smectites montmorillonite in which the main exchange cation is Na possesses the highest bulking-up ability. These bentonites have received the name of alkaline bentonites. Bentonites in which among exchange cations Sa prevails have received the name of calcic. Except Sa at montmorillonite in a significant amount there can be Mg. In some bentonites magnesium holds the prevailing position in relation to calcium. Most often calcium-magnesian (alkaline-earth) versions meet. Calcium and calcium-magnesian bentonites can be transferred to discharge sodium by their processing by solutions of sodium salts. Such sodium bentonites are called activated, and process of ion-exchange substitution by activation.

The general properties of bentonite clay are dispersion, the adsorptive capacity, nabukhayemost, bonding capacity and other characteristics.

Kolloidnost - property of particles of a disperse phase from 10-7 to 10-5 cm in size as a result of heavy Brownian motion to be distributed in the disperse environment.

Swelling capacity - an attraction of molecules of water finely dispersed particles of clay. Adsorption - ability of clays to absorb substances from the liquid environment.

Bentonite powder represents a product of drying and a high milling of natural material - the bentonite clay which has kept all the colloid and chemical properties. Dry muds have a number of advantages before lump clays. It:
- dispersion (swelling small) particles happens quicker and more stoutly, than large;
- transportation of a dry mud, especially on long distances costs cheaper;
- mechanization and automation of processes of preparation of solutions;
- others.

The effect of modification is expressed in increase of viscosity of clay suspension due to additional dispersion of clay, increase in volume of a bound water, viscosity of a disperse medium and strengthening of gelation.

Depending on application, bentoporoshka should answer certain qualitative characteristics according to State Standards and Specifications of this industry.

Dry muds - the main material for preparation of a drilling fluid with a necessary complex structural pеологических, filtrational and other specific properties. Chemical additives to a drilling fluid are considered only as means of regulation of indicators of properties of solution.

Though clay is not the only drilling mud component, it is possible to claim, nevertheless, that such important characteristics as viscous, structuring and filtrational significantly depend on contents and colloid and chemical properties of a dry mud. Obviously, quality of a dry mud is better for those, than at the smaller maintenance of a clay phase it forms dispersion with the set properties. It is equivalent to determination of quality of dry muds in size of the solution exit (SE) with rated minimum value of effective viscosity. Its influence, directly on drilling technical-and-economic indexes, is defined by change of mechanical drilling speed and a consumption of chemical reagents. Besides, BP influences also the size of operational expenses of the boring enterprises for article transportation costs.

Bentonite clay - one of valuable fossil materials which has found the application in the most different areas of human activity. Other its name - fulling clay that is connected with use of such clays for cloth degreasing. In the modern industry bentonite clay is used, mainly, in metallurgy - for forming of iron-ore pellets and an izgotovka of a sand. Use of bentonite clay at preparation boring and grouts, means of purification of oil products, and also as raw materials is not less important for production of warm and hydraulic insulating materials.

Purely bentonite clay is used seldom, most often in the industry and other areas of economy bentonite dry muds are applied. This material is received by drying and fine crushing of bentonite clay. Bentonite glinopoproshka add to composition of polymeric materials, add to concrete that increases their vodoadgediozny properties. On the basis of bentonite powder the most available boring mixes at cost possessing, besides, by high operational properties and the providing excellent results are made at vertical or horizontal drilling.

Bentonite dry muds in combination with refractories - the main raw materials for production of a natural sand. Depending on proportions of a dry mud and perlites, such mixes can possess different properties. A sand on the basis of bentonite clay differs in high strength, optimum gas-tightness, at the same time is easily formed and is ecologically pure.

Bentonite clay is known also as bentomat - the material used for a waterproofing of different objects. This material is very convenient in operation and can be applied practically under any weather conditions, including - at negative temperatures. The waterproofing board as a part of which there is a bentonite clay has the long term of operation, maintains almost unlimited number of cycles of hydration dehydration and easily transfers change of seasons. Important property of the waterproofing screen consists of bentonite that material is independently recovered in case of receiving damage.