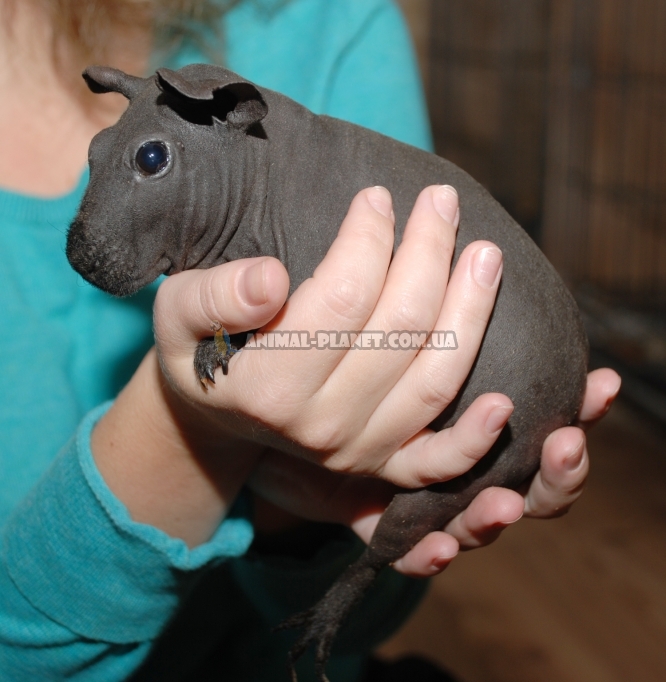 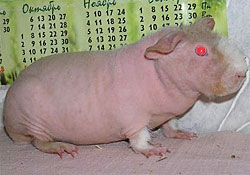 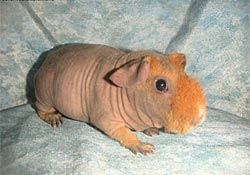 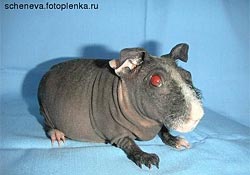 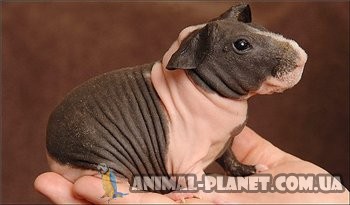 In the USA this breed is not recognized yet.

Now Skinni - the most widespread breed of nonhairy Guinea pigs, nevertheless, all of them still are considered as rare breed. Skinni almost completely bald, only small sites of short fluffy wool at the muzzle/head, shoulders, back and at anklebones are present. And even the baldest of them nevertheless have insignificant quantity of almost invisible down on all trunk that does them velvety and nice on the touch.

Actually, is known of Skinni not so much except that they for the first time appeared in laboratories of the Canadian scientists occupied with dermatological researches. For the first time pigs of this breed were provided by Laboratory Charles Riverz (Canada) in 1976. At that time all Skinni were white with red eyes. Since then manufacturers diligent over them worked, from generation to generation crossing them to "woolen" Guinea pigs, using carriers of gene of Skinni, and, thus, strengthening their immunity. Process is rather slow, but today, along with white red - eyed variation, we have various colors. Much like original color of Skinni, so rozovenky pigs!

Now Skinni - healthy and strong animals, and breed develops and progresses. Even more to expand and strengthen gene pool, many manufacturers continue cultivation with use of carriers. It to some extent explains why one animals today "balder" whereas others still have some pilosis on body.

Here and there still information that Skinni often has problems with health comes across. However so far situation already another, especially if you deal with the authoritative experienced manufacturer who responsibly approaches question of cultivation of breed, and does not pursue bigger degree of "lysost" at animals to the detriment of their health and endurance.

Skinni's gene is recessive. At Skinni and Skinni's knitting, you will always receive Skinni. At knitting of pig of breed Skinni and mumps with wool, you receive pigs with the shaggy curling hair, being carriers of gene of Skinni. It is impossible to tell precisely how many is born carriers, yet you will not check them on knitting with the pig of breed Skinni. At the subsequent knitting with Skinni and the carrier, you can receive 50% of pigs of Skinni, however the percent can be both smaller, and big. Also the pigs who were born from knitting with the carrier are born not bald. They are born more woolly, than completely bald pigs. At the subsequent knittings of these pigs with pigs of breed of Skinni, wool will is gradually thin it already possible to achieve appearance of kids completely without wool on body.

Skinni's cultivation and carriers of gene leads to birth of more hardy descendants. Of course, for receiving from these knittings of Skinni there will pass enough time, however it improves breed genetically. Improves structure, the size and endurance of breed eventually.