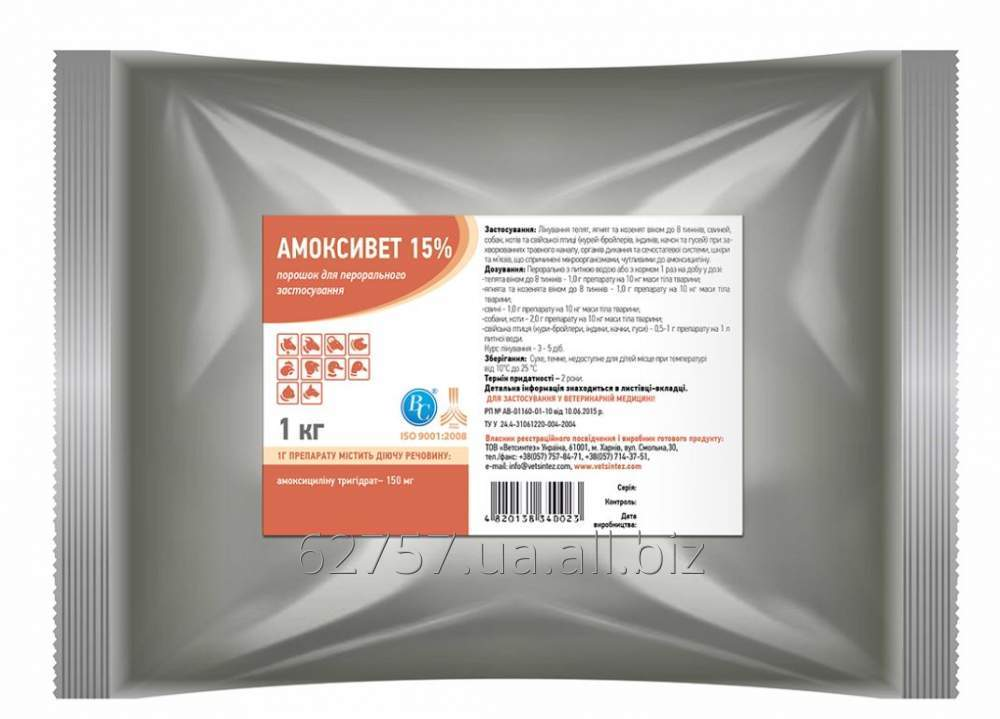 Oily suspension from white till yellowish color. Suspension at storage is stratified.

Amoksitsilin treats group β - laktamny antibiotics. It blocks synthesis of cellular walls of bacteria, brakes activity of enzymes of a transpeptidaza and karboksipeptidaza, causes violations of osmotic balance which leads to death of microorganisms at a development stage.

Such microorganisms as are tolerant to a preparation: Pseudomonas aeruginosa, Serratia spp., an indole - positive Proteus (except Proteus mirabilis), Enterobacter spp., Citrobacter spp. and Acinetobacter spp.

After intramuscular introduction amoksitsillin it is quickly soaked up in blood and distributed in the majority of fabrics and liquids of an organism. At an inflammation of brain covers concentration of a preparation in tserebro back liquid can reach 30-60% of its concentration in blood serum.

It is removed amoksitsillin mainly by kidneys in an invariable look by kanaltsevy secretion, but the insignificant part is metabolized by hydrolysis to inactive penicillinic acid and removed with urine.

Intramuscularly or hypodermically in doses:

Apply a preparation with an interval of 48 hours within 3-5 days, and repeat an injection for the third and fifth day.

Before application the preparation needs to be warmed up to 36 s and to shake up carefully.

Hypersensibility to penicillin or other preparations β-laktamny group.

Not to apply to girlfriends, guinea pigs, hamsters and other small herbivores.

Not to apply an animal with the broken function of kidneys.

If the dose of an injection exceeds 20 ml, it is divided and entered into two places of a body.

The face of animals on meat is allowed in 14 days after the last introduction of a preparation.

Consumption of milk in food is allowed to people in 4 days after the last introduction of a preparation.

Received, to the specified term, meat and milk utilize or feed an unproductive animal, depending on a conclusion of the doctor of veterinary medicine.

Bottles from neutral glass of the NS-1, NS-2, USP-1 brand closed by rubber traffic jams under an aluminum running in on 10; 50 and 100 ml. Secondary packing - a cardboard box.

After the first selection from a bottle the preparation needs to be used within 14 days, in storage conditions in the dark place at a temperature from 0 to 5 °C.