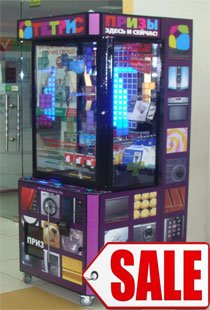 After game payment the player has to put horizontally moving blocks at each other. Gradually, as the player successfully builds new level over the previous blocks, game gradually becomes complicated (blocks move quicker and quicker). Having reached the mark "small prize", the player can choose one of the prizes hanging on six lower springs or continue game with a possibility of a prize of one of expensive prizes hanged on four top springs.

The game devices "Tetris" do not belong to gamblings and correspond to the legislation on the entertaining equipment.

Simplicity of game, customizability and valuable prizes – here the main characteristics thanks to which this type of automatic machines quickly pays off and begins to make profit!

The game devices "Tetris" are equipped with additional resources of safety:
- On doors of a show-window metal eyes for additional padlocks are fastened,
- For a show-window the shock-resistant tempered glass is used.

The game devices "Tetris" it is equipped with wheels and it is considered the mobile vending machine.

Principle of game: The player puts in a pyramid horizontally moving blocks at 15 levels. At the 11th level it is possible to take away a small prize (SMALL PRIZE) or to continue fight for more valuable prize (TOP PRIZE).