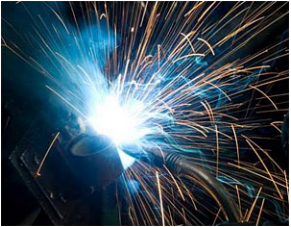 Acetylene welding is the proved way of receiving reliable and beautiful welded connection for a long time.

Acetylene is the combustible gas received at calcium carbide reaction with water. The set of the equipment for gas-welding works represents, as a rule, the generator, a cylinder with oxygen, connecting hoses and a torch. The generator is filled with carbide and further at the expense of internal pressure maintain necessary water level in capacity, necessary for production of combustible gas. Usually for storage of acetylene use standard cylinders — 40 l (PB 10-115-96, GOST 949-73).
Technologically welding by acetylene is very simple, however, the increased attentiveness and patience is required. Temperature of the received flame can reach 3300 °C.
For acetylene welding use special torches which are marked by numbers from 0 to 5. The smallest — 0, the greatest — 5. Different torches are used depending on thickness of the details subjected to welding.
Before works it is necessary to pick up the size of a torch and to adjust it. Having carefully examined a torch, be convinced that number of a tip coincides with number of the nozzle supplying gas which is established closer to a torch handle under a massive nut. It is possible to get to work. Combustible gas is set fire and oxygen is gradually added, the steady flame will not turn out yet.

When welding usual "black" metals it is necessary to make a neutral flame. Such type of a flame has an accurate crown and consists from 3kh brightly allocated parts. The first part — a flame kernel, the having bright blue coloring with greenish outflow, second part — a recovery flame of pale blue color — this area is a worker. And the third working part is a torch of a flame. Acetylene welding demands well cleared surface. During the work as a gas torch 2 ways are used: right and left. At right the flame is directed to the turning-out seam, it will provide its slow cooling and, respectively, excellent durability and elasticity. Here the additive wire is moved after a torch flame. At the left way the flame is directed from the turning-out seam, and the additive wire is brought in a welding bathtub after the torch is moved on the subsequent position. The last way is considered more productive if metal thickness no more than 3 mm since there is better a formation of a seam because of good visibility for the welder. At a bigger thickness of metal usually use the right way of welding.
Oxygen-acetylene welding call still autogenous and widely use when carrying out body repair work. At car repair shops mobile acetylene generators, for example, the ACM-1,25 type are used.

On a way of interaction of carbide of calcium with water generators of acetylene are divided into three types: "Carbide in water" (KV), "Water on carbide" (VK) and "Water Replacement" (WR). Let's consider pluses and minuses of each of types.
The acetylene generator of the KB system possesses big efficiency of carbide of calcium, provides the best conditions of its decomposition, excellent cooling and washing of gas. The main shortcomings of such generators it is possible to call a considerable consumption of water that causes the increased sizes of generators, and also decent quantity of waste. This system is applied in stationary generators of big productivity.
Generators of acetylene of the VK system are simple in respect of a design, demand rather small amount of water, can work at carbide with various granulation. This system is applied, as a rule, on mobile devices with a productivity of acetylene up to 3 m3/h. The main minus of generators of this system are a possibility of an overheat of acetylene in a zone of reaction and incomplete disintegration of carbide of calcium.
Acetylene generators of the VV system are reliable in work and are easy to use. This system is applied in mobile devices of average and low pressure with a productivity not higher than 10 m3/h. Their minus is the possibility of an overheat at the gas offtake termination.
To common faults of gas-flame welding will be correct to refer the increased potential of explosion and fire danger, rather high gas contamination on workplaces. Except that concerns body works, when welding thin-sheet details such undesirable phenomena as an overheat can be observed and burned through. Bringing such surfaces to requirements of a trade dress very labor-intensive process, and here service life because of weak resistance to corrosion is quite low.

Not superfluous will be to mention very important points to which without fail it is necessary to pay attention during the work with acetylene welding:
Control leak of working gases. Do it periodically, it is desirable every time before performance of welding works, surely check tightness of all connections. For this purpose it is possible to use usual soap solution;
It is possible to store acetylene cylinders only in vertical position;
Never it is impossible to hang up on cylinders clothes as oxygen possesses ability to be absorbed in fabric that can lead to ignition or even explosion;
During the work with gas cylinders never use oil liquids and other lubricants. Hit of pure oxygen on such materials can become a cause of explosion;
Do not allow falling of cylinders. When transporting on long ranges use or special carts as holders, or you fix cylinders chains if you transport them in a car body;
Before starting welding works, it is necessary to clean a nozzle of a gas torch. Any blockage can become the reason of emergence of the return blow is when there is a flash in a nozzle and fire goes on hoses to a cylinder with acetylene;
On the generator or a cylinder always in good repair there has to be a valve which will work at the return blow and will block supply of combustible gas;
If there is a change of the welding equipment, then it is necessary to blow hoses by means of compressed air;
The welder always has to work in protective clothes (in a suit and in special glasses).
Remember! Explosion of acetylene can become the reason of powerful destructions and heavy accidents: at explosion of 1 kilogram of acetylene approximately twice more heat will be allocated, than at explosion of 1 kilogram of trotyl or 1 kilogram of nitroglycerine.

In Ukraine the leading supplier of acetylene is the DP Air Gas company for today.
Contact the seller
Acetylene

We recommend to see
Acetylene
Send inquiry
Buy
Contact supplier
Your question has been sent successfully
Consultants of the shop typically answer questions during the day.