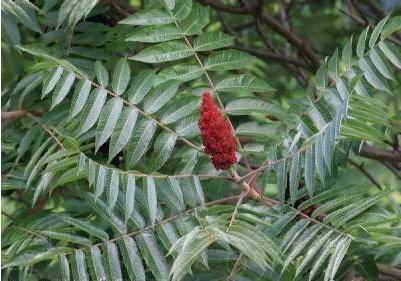 Acetic tree - Sumy of olenorogiya. A novelty from America

This transatlantic guest from North America for quite some time now became new trend in landscape gardening art. There he lives in the most Spartan conditions — on dry and stony soils of the lower part of mountains. It is quite photophilous, well transfers severe winters and droughts, can grow on the salted soils. Unpretentiousness and ecological stability of an acetic tree were estimated long ago by specialists in decorative and greening work. It was promoted much also by attractive appearance of a plant.
Decorative effect to a poison ivy is given by umbrella - shaped krone, dense and large plumose foliage which by fall gets red - pink coloring. Remarkably the young escapes which are plentifully covered with velvety red omission, legs of inflorescences and scapes of leaves look. But there is more to come. At the end of summer the poison ivy is decorated with karminovy brushes of fruits which, bristle bright red down, the reminding cervine pant. Fruits can keep on branches up to spring.
Except listed, the poison ivy of olenerogiya has still some application. Its bark of roots and a bass are used in traditional medicine of various countries as styptic means. Wood of a poison ivy is painted in colors from yellow to dense orange - red and is appreciated as material for small hand - made articles.
Acetic tree — rather low among trees. Often it grows kustoobrazno. It occurs thanks to numerous root offsprings from whom the new young growth extends.
In the Central Asian kitchen it, actually, replaces a lemon, giving, besides, reddish color to dishes.
In the Caucasus with a poison ivy shish kebabs pickle. And in Turkey fill with a poison ivy salads. By the way, I can advise fans of salad gas stations on an acetic basis for which vinegar is impossible it. The poison ivy is combined with meat, fish, bean, rice, buckwheat - almost with anything! On its basis it is good to do marinades and sauces, it is possible to add to soups and almost to any (unsweetened, generally) some porridge.
The tree price in our nursery 10 times less (by 4 - 6 times) than at competitors delivery on the territory of the country can be made by services of express delivery the Night Express, New mail, Intaym, the Euroexpress

Contact the seller
Acetic tree - Sumy of olenorogiya. A novelty from America